Maritime law is governed by a strict set of rules and regulations that are comprised of various acts and other government instituted provisions.

One of the most prolific of these statutes is the Merchant Marine act of 1920, more commonly referred to as the Jones Act. Revised in 2006, the jones act establishes laws and regulations for US waters and ports.

It was created as a way to protect seaman in ways that land-based law fell short and protect the shipping and maritime industry as well as the growth of commerce.

Maritime workers, or seaman, are not protected under land based federal laws the way other industry workers are. For example, a seaman who is injured on the job typically cannot apply for workers compensation like a warehouse employee would. So, the Jones Act was created to help maritime workers recover damages from accidents and injuries.

Amongst the waters and ports here in Miami, Jones Act negligence is taken very seriously, and Madalon Law has a team of professionals ready to handle your case. 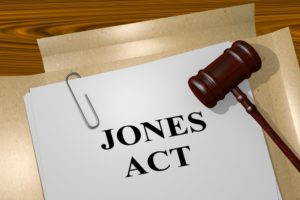 Who Falls Under the Jones Act?

While seaman or maritime workers is a broad name for various occupations, it is helpful to know who is covered under the Jones Act.

Here is a list of some of the workers who should contact a Jones Act negligence lawyer in Miami if they are injured at work.

As a general rule, anyone who works on the waters or ports of Miami, Florida and contributes at least 30% of their time to that vessel is usually protected under the Jones Act.

Furthermore, Seaman must have their main job function be of offshore duties or on a vessel that is moored to a dock but is capable of navigating on open waters. These vessels must be already built, meaning a worker who is contributing to the construction of a vessel would not be covered.

If you are confused as to if you or a family member who has been injured on the job is covered, contacting a Jones Act negligence attorney in Miami can give you clarification.

Negligence Covered Under the Jones Act

The Jones Act provides benefits to those maritime workers who have been injured through no fault of their own, but through the negligence of their employer.

Seaman who are injured as a result of their own actions, such as being intoxicated while at work, are not provided the same protections as their injury is at the fault of no one else.

Understanding what types of injuries and negligence is covered can be tricky. If the negligence resulted in a fatality, a Jones Act death attorney in Miami should be your first call so that you don’t have to deal with the further pain of insurance companies and their legal teams.

According to MaritimeInjuryGuide.org, example of covered negligence can include:

This list is not all encompassing and does not include a variety of other negligent actions that employers take that result in the injury of their employees, but it’s a list of common reasons that are cited In Miami for Jones Act deaths.

When a seaman experiences an injury as a result of negligence and potentially succumbs to their injuries, the family is left with a list of questions and an incomprehensible amount of grief.

Madalon Law is the choice of many as their Jones Act death lawyer in Miami. We have a large legal team ready to handle all the details of your case and get you and your family the justice and compensation you deserve.

No one should be left to fight alone, that’s why we stand ready to be your friend and liaison in dealing with injuries and death covered by the Jones Act.